Difference between revisions of "/cgl/"

"And Dramu's there against Demonbane! Dramu! And this could probably not mean much for Dramu, he's forced out to the left. There's Gutterbitch, and Derpy-chan! It's over! It's over!"


— DrBorisG as an unmanaged /cgl/ scored the goal against /pol/ that brought the Seagulls into a Winter Cup for the first time ever.

The Seagulls were looking to make waves in their first appearance in the 2012 Spring Babby Cup. After a lackluster friendly match, /cgl/ went into the round robin stage of the 2012 Babby cup with everyone thinking that they had a snowballs chance in hell to come out of the group. /cgl/ ended up winning their group but faced a playoff game to get into the 4chan Summer Cup against the red hot /toy/ club. Despite putting on a good show for the crowd, /cgl/ drew 4-4 with /toy/ after 120 minutes of football, leading to the penalty kick shoot out where /toy/ won 4-5.

/cgl/'s fortune would only get worse over time. After poor performances in the 2012 Autumn Babby Cup friendlies, the team was severely punished due to >Molly submitting an incomplete roster. The punishment was that the team was stripped of all of its gold, silver, and bronze players, and on top of that, the goalkeepers would have a rating of 1. With such a severe handicap, /cgl/ was destined to suffer three losses in the group stage. Surprisingly, the team managed to score a goal against /sci/ and was close to drawing the match. Despite this brief moment of hope, /cgl/ would only serve to be free points for /sci/, /trv/, and /f/. The only positive to be found after the three defeats was that /cgl/ was not in last place in the final cup rankings.

Despite these tough times, there was a light at the end of the tunnel for the Seagulls. The Weeabowl saw /jp/ and /cgl/ have the first match and it turned out to be the most exciting match of a disappointing competition. Dramu ended up scoring all 5 goals for /cgl/ in an epic 5-4 win for /cgl/ in the quarterfinals. In a tournament full of upsets, /cgl/ would continue their good run against /d/ with a 2-1 win that saw Derpy Chan score the second fastest goal in 4chan cup history. Sadly, all good things come to an end, and /cgl/ was unable to win in the Weeabowl final. Even with Dramu scoring very early into the match, /u/ would make their 3rd comeback win in the tournament with the final score being 1-3. Overall, the Seagulls can take pride in their Weeabowl run as they showed that they have lots of potential for success. 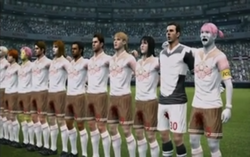 /cgl/'s squad with their custom aesthetics used in the PES 2013 era.

/cgl/ finally returned to official 4chan cup matches in the Spring season, and even found a new manager named Coleslaw !!eFOZTtR5RXJ. During the friendlies of this season, the Seagulls finally broke their winless streak with a 3-0 win against /diy/, but a dull loss to /fit/ brought them back down to Earth.

In the actual 2013 4chan Spring Babby Cup, /cgl/ shocked everyone. First, they ended /an/'s lengthy undefeated streak in a match notable for /an/'s goalkeeper taking a penalty for no good reason, and having it blocked. In the same group, /vg/ proved to be a much weaker opponent than anticipated, as /cgl/ had 13 shots against them, compared to /vg/'s single shot in the whole match.

Finally, there was the infamous match against /m/. In short, /m/'s manager was missing when his team desperately needed to win against /cgl/. The match was tense despite this, and though the referees looked to help /m/ with a penalty kick, it was /cgl/ who got the last laugh in a 2-2 draw: /cgl/ qualified to the 2013 4chan Summer Cup, and /m/ was left in the babbies for a bit.

Then Dragongate happened, so the drama with /cgl/ and /m/ was for nothing, since both teams ended up qualifying as a result. /ck/ eliminated /cgl/ in the Spring Babby knockouts in a rather embarrassing showing for the latter because the Seagulls had no shots on target.

Coleslaw left the team after Dragongate, and for the remainder of the year, /cgl/ would keep going without a manager. The highlights for /cgl/ in the Summer Cup were the funny glitch with their chant ("Seagulls! Seagulls! Se-e-e-e-e-e-e-e-e-e"), and their surprising 1-0 win over /fa/. Aside from that, it was mostly pitiful and the Seagulls were sent back down to the babbies.

It looked like /cgl/ was set for another awful run, as the new rules put in place by DrBorisG got the team sent down to pot 4 for not having a manager, and some players had their stats decreased because the team did not follow the new height rules. After some initially uninspired play, all /cgl/ needed to qualify for the Winter Cup was a win against /pol/ on the last Group E match. In an insane match that will be remembered for the piss-poor defending, /cgl/ got a massive upset win over /pol/. With this, /cgl/ overcame the odds and qualified to the 2014 4chan Winter Cup with 4 points in the group stage. /hr/ would then eliminate the Seagulls in the Round of 16.

Some time in this season, it was revealed that Coleslaw was another identity for Doogie_ !!x+r9Qm5rK7O. Since he left the team after the Spring Babby cup of this year, no matches needed to be nullified as he was never in control of two teams in the same cup.

After the chaos in the previous Autumn season, Fang !!rFoWXKYr2uG came in to manage /cgl/, and he was found out to be the original /cgl/ manager in the first Babby Cup. With his return, and the cup moving to PES 2014, the Seagulls were given a complete makeover, and they put on a hell of a show in the 2014 4chan Winter Cup.

In the opening match for the cup, casual viewers greeted the new anthem with approval, and /cgl/ continued the tradition of shocking results: they drew 1-1 against /a/ (a team that would end up being the runner-up of this cup) with a wacky formation. /cm/ would also leave the stadium with blushes as they drew 2-2 to /cgl/, choking a 2-1 win during injury time. At the final fixture of the group stage, /cgl/ obliterated /adv/'s defense, and with an astonishing 7-3 win, /cgl/ topped the group.

The fun was over for the Seagulls at the round of 16. Due to plenty of spaghetti being spilled by the strikers, /cgl/ were shut out by /f/ in a 2-0 defeat.

Initially, the seagulls appeared to have found their footing in PES 2014 once again with a 3-1 win over /y/, but this would be /cgl/'s only win of the cup. /sp/ had little trouble defeating /cgl/ in the match that followed, with the 3-1 result being flattering to /cgl/ considering how many chances /sp/ had to score. Next, newcomers /i/ got their first win ever against /cgl/, and this was the breaking point for fans. After the game crashing, the tactical autism, and the poor performance of their team, /cgl/'s fans started a riot in the stadium, postponing the match for a while. Nothing occurred once the match resumed and /i/ walked away with a 1-0 win. Though the 1-1 draw between /y/ and /vp/ kept /cgl/ alive for a while longer, the seagulls once again disappointed in a 2-1 loss to /vp/. This kept /cgl/ in the babbies for another season.

The 2015 Spring Babby Cup run for /cgl/ could simply be summarized as "Autopilot glory."

Due to >Fang missing the managerial sign-up for the season, the Seagulls had to play this cup without management. Much to everyone's surprise, /cgl/ got 3 (three) out of 4 possible victories in the group stage, one against /sp/, and their third against /b/. That last win was especially famous (or infamous, depending on who you ask) because it not only got the Seagulls in 1st place of the group, it also sent /a/ to the 2015 Autumn Babby Cup.

The glory continued in the round of 16: /cgl/ was drawn against the also managerless /cm/ and defeated them 1-0. This was the first time the Seagulls had ever gotten past the round of 16 of an offical cup. J Nig was an essential part of the team with her goals, and she scored another hat trick in /cgl/'s 4-2 win over /mu/ in the quarterfinals. Now, the Seagulls reached the top 4 of an official cup for the first time ever.

/cgl/'s good times came to an end against /tv/, who successfully fucked their shit up in a slow match. The Seagulls lost 1-0 there, but they were able to get something of a happy ending with a 2-1 win in the third place match.

The same autopilot glory would become a nightmare in the summer - /cgl/ did not submit an export and was replaced by /x/ in that season's cup, sending the Seagulls back down to the Babbies. Fang disappeared without a trace and, as the Autumn Babby Cup approached, Lerlee !!gBl8fBsf1ss became the new manager. During the Autumn Babby Cup this year, /cgl/ kept their tactics the same and got promoted with their manager essentially letting the team play on autopilot mode again. The two wins that the Seagulls got in the group stage were enough to qualify for the 2016 4chan Winter Cup, and after those, the team essentially stopped trying in their remaining matches of the cup. Once again, /cgl/'s autopilot success continued to haunt them afterwards; nobody showed up to manage or sign up /cgl/ for the 2016 4chan Winter Cup, and they went right back down to the babbies before a single match was played.

After years of death, my lolita /cgl/ was freed to return to autopilot glory in the 2018 4chan Autumn Babby Cup Qualifiers. It didn't go so well. Despite scoring the first goal against /y/, /cgl/ gave up four goals before halftime and scored a consolation that was too little, too late in a 4-2 loss. /cgl/ didn't score a single goal the rest of the way through, losing 1-0 to /mu/ and 2-0 to /o/. The end result was last place in the fetus and an uncertain state of affairs heading into the 2019 4chan Spring Babby Cup.

...The Seagulls will return for the Spring Babby...with an old manager once again. The old manager abandoned the team again and was forced to run autopilot once more.