Difference between revisions of "/int/"

One of 4chan Cup's founding boards. With their strong squad, composed of illustrious men such as Monkey Putin, Gondola and Spurdo Spärde, their potential for victory has secured relevant places in past tournaments. Using the tactics of devastating hussar charges, /int/ ethnically cleanses their opponents, removing all their hopes for victory. If you are looking for white people, /int/ is the best team to follow. We promise. 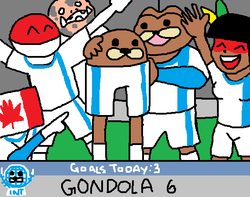 VICTORY ANTHEMS
When Spurdo is Player of the Match

SPECIAL GOALHORNS
Pillar Men Theme - goalhorn of Why Yes, How Could You Tell?
Venetian Boat Song Op, 19 No. 6 - goalhorn of Gondola
The Hymn of the Russian Federation - hattrick goalhorn of Monkey Putin 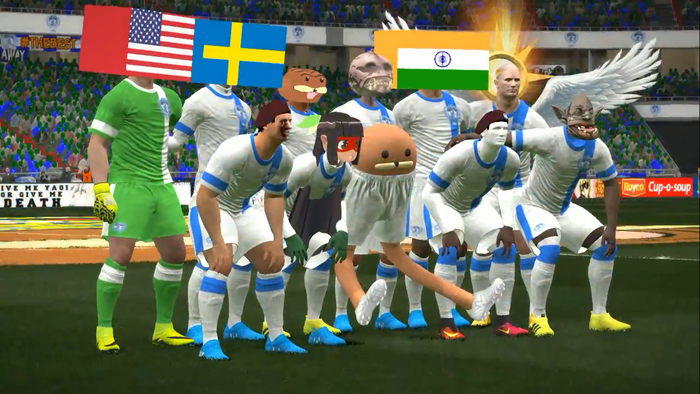 With Amerimutt now on the team /int/ had the advantage of having a huge demoralizing affect their opponents, how could such an abomination be allowed to play? The team was once more placed in Group H and against an autopilot, /cm/, and two teams generally regarded as shaky, /a/ and /an/. Surely this group stage run was going to be easy, right? Not quite. A decisive and quick victory against /cm/ made fans confident in /int/'s ability to progress, but the following weekend /int/ was only able to secure a draw against /an/, a draw is better than nothing, but it's not great. What's worse than a draw is a loss, which is precisely what they got against /a/. A single score in the very opening of the game was all /a/ needed to put away the game, as /int/'s anemic offense proved incapable of doing its job. Still, it wasn't all bad, /int/ squeaked by into the Round of 16 based on goal difference, having 1 goal to their favor as opposed to /a/'s 0. It was a messy but legitimate advancement.

/int/'s Round of 16 game would prove almost completely identical to Summer 17's, except instead of facing off against gays, the international league of shitposters would instead be taking on a different brand of faggots: horsefuckers. Once more /int/ would be facing off a very strong opponent, and once again it would grind down to a 1-1, with Gondola making the first strike at the 26th minute, while /mlp/'s Twilight would score off a defensive blunder by everyone's favorite Finnish bear, Spurdo. Spurdo again would prove how utterly terrible he is at divegrass by fugging up in benuldies once more, allowing /mlp/ to continue on their rampage to the finals only to be themselves shut down in benuldies by /u/.

Once more /int/ was out in the Round of 16, and this time Spurdo was under investigation under suspicion of being a closeted horsefucker. A third Round of 16 exit made fans start to think that /int/ was suffering from the same curse as /vr/ and /d/, even the managers started to suspect as much. Will /int/ fall out of the Elites next year cup?[spoiler]no[/spoiler] Will /int/ finally break through the Round of 16? [spoiler]yes[/spoiler] Tune in next cup to find out!

Now in their fourth Elite in a row, people have begun recognizing /int/ as a force to be reckoned with, and hopes from both fans and neutrals were high for the team to make it far. For a third time in a row, /int/ was placed in Group H, but this time the group looked pretty tough. With solid teams /jp/ and /tv/ rising from the babbies and Elite runner-up /mlp/ looking to challenge /int/'s elite status, it was looking to be a doozy of a group, and some were even calling it the group of death. Many /int/ fans were expecting a disappointment, as that is what /int/ has delivered for most of its existence as a team, but this is a very different /int/.

/int/'s first game was against a strong /jp/, but /int/'s 3-4-3 caught the shrine maidens off guard, with Gondola scoring early in the game at the eighth minute, followed up late in the second half by 77 CMF El-Peru ANO before Putin put the game away with a goal at 90+, the defense played their part well with >Be American >Get Shot in particular showing his prowess as goalkeeper by deflecting several lightning shots by /jp/ towards the end of the game. However, this was only the first game, and /int/ was not to get comfortable, as their next opponent was a strong-looking /mlp/ fresh off a 2-1 victory against /tv/, this was the same team that ended /int/'s championship hopes 6 months ago and was not to be underestimated.

The third of August came around and the stage was set for a rematch. Though /mlp/'s offense looked strong in the early stages of the match, /int/ calmly switched presets and suddenly looked a lot better. With only a few minor changes in livemanaging, /mlp/ was suddenly under siege, and Putin scored towards the end of the first half at 43. As the second half commenced and /mlp/ began ramping up the pressure, Spurdo got control of the ball and managed to get it past the hooves of /mlp/'s keeper, putting /int/ firmly in control of the match with the Finn (somewhat) redeeming himself for his terrible performance in /int/'s last match against /mlp/. The horsefuckers turned up the heat but /int/'s defense remained calm under pressure and eventually the final whistle was blown, now /int/ was in a very good position to advance, all they needed was a draw in the /jp/-/tv/ game or a /jp/ victory. Though defeated in their previous game, /jp/ proved their own mettle when they defeated /tv/ 3-2 and allowed /int/ to advance to the Round of 16 once more. After a memey, somewhat controversial 7-1 loss to /tv/, /int/ alongside /jp/ who had defeated /mlp/ 5-3 advanced to the knockouts, elite status confirmed once more.

The draw placed /int/ against /vr/, a team that has had similar luck with Elite Round of 16 games, but their troubles date further back which might have given /int/ the upper hand in this choking competition. /int/'s offense proved impossible for the retro warriors to stop with Spurdo and Putin both putting goals in the first half, but Segata Sanshiro tried to carry /vr/ on his back, scoring at the 52nd minute before Putin scores a brace eleven minutes later. Segata again scored at the eightieth minute, but by then it was too late, /int/'s victory was assured, and the team was onto the Quarter Finals.

/int/'s next game was versus /k/, a team known for its offense and its impeccable shooting skills. It became a race for the most goals, the game was opened up eleven minutes in by /k/'s Moist Nugget, the reliable Russian rifle easily sniping past >Be American >Get Shot's defenses. Sopa de Macaco, a 77 CMF would score /int/'s first goal of the game, as he was left completely uncovered as /k/'s defense tried instead to smother Spurdo. As the second half commenced, Amerimutt, who knows a thing or two about guns, would himself sneak past /k/'s defenses. Ten minutes later at 63' Putin put in what he and assuredly everyone else thought would be the killing blow, but Zergface would quickly reignite /k/'s hopes with a goal almost immediately afterwards. Things were looking tense, and things started to look even worse for a now-tired /int/ when Moist Nugget brought the game even. It looked like it was going to go benuldies, immediately all of /int/'s fans suffered flashbacks to every previous visit to benuldies and shuddered. Spurdo Sparde did not give up, however, and scored 83 minutes in and was followed up shortly afterwards by his adorable Italian cousin, Gondola. Despite a valiant 90+4 hat trick by Moist Nugget, the game ended with an /int/ victory in what might have been the closest game of the cup. /int/ has finally reached the Semi Finals, and it truly was a team effort, with five individual players having scored during that last match.

Now it was on to the Semis. /int/ was a favorite to win at this point, everyone expected it. Who was going to stop them? /vg/? Surely not. And yet, as is always the case with /int/, disappointment strikes. Apparently exhausted from that shootout with /k/, /int/'s strikers found themselves completely incapable of scoring past the impenetrable defense of Jannu, and /vg/'s Unity-Chan decided to show them how it was done, scoring two goals, ending the game in a solid 2-0 and allowing /vg/ to progress to the finals against /sp/. /int/'s fans and indeed many neutrals were in a bit of a shock after that, /vg/'s rise is a perfect example of an underdog story, but the day was not yet over for /int/.

The most important match of the day was coming up, the third place game, and /int/'s final game of the season was to be against /tg/. The neckbeards were not to be underestimated, but /int/'s strikers who were absent in the game versus /vg/ decided to show up, with Spurdo and Putin both rapidly scoring early in the first half and both scoring again later into the half. While Doomrider scored two goals of his own, securing for himself the lead in the race for the Golden Boot, he alone couldn't stand up to /int/. When the second half rolled around, /tg/ instead focused on securing the consolation prizes of Golden Boot for Doomrider and Golden Glove for Tankred, heavily marking Putin to prevent him from stealing away the Golden Boot himself. /tg/ succeeded in their goal of stopping Putin, but /int/ won the ultimate prize: The Third Place Trophy. /vg/ won some unimportant game against /sp/ as everyone celebrated /int/'s success.

With the end of the cup also came the end of indistrikable !!g8zMCvgDPLW's managing career. The head manager retired, having lead /int/ to its greatest height since 2012. In his wake he leaves a strong team with a solid fan base. 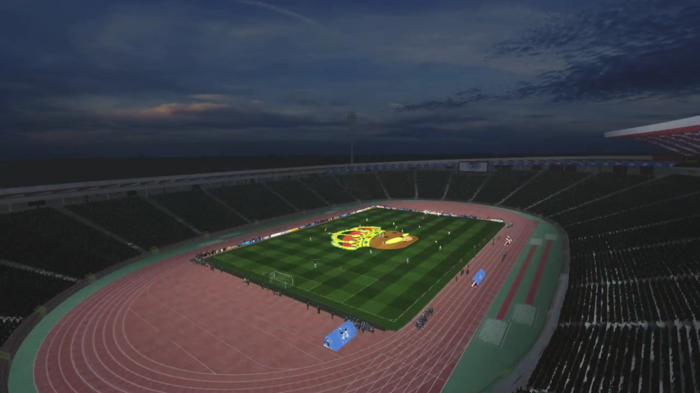 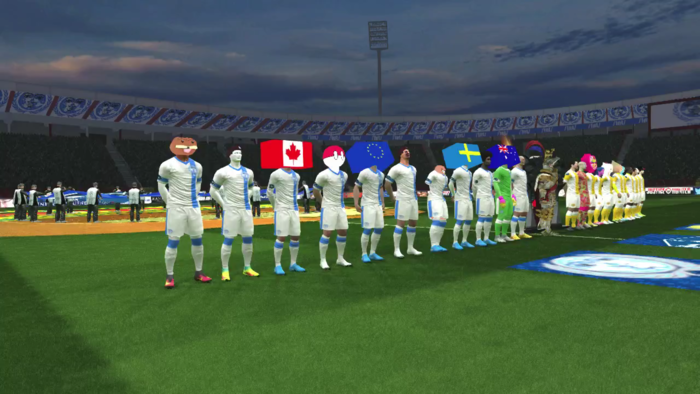