The /x/ 4chan Cup team was founded in 2011, based on the 4chan board /x/ - Paranormal, making it one of the first teams on the tournament. Its first appearance came to be during the 2011 4chan Summer Cup and with a small fan base, it established itself as a consistent team for the future.

Discord for the team: https://discord.gg/Mx5Nybk

The users of the /x/ board are all paranoid schizophrenic with little-to-no social life because, let's face it, the world might end at any minute now, who has time for this whole "life" thing when you can discover and explore the vast knowledge of occult and secret teachings passed on for generations by the elders of an ancient tribe that still remain undiscovered by modern man, while discussing the next false-flag attack perpetrated by a secret society that is constantly watching our every move, not to mention the astral projections that require vast amounts of meditation, chaos magick or even demonic possessions, which can only bring about bad energy your way, which in turn destabilizes your initial chakras, and all of this while you wait for the impending doomsday that could happen at any moment because the prophecies foretold by our ancestors are never wrong, unless they happened in an alternate universe which would explain the spiritual connection we have with nature, in fact, most urban explorers will assure you that ghosts are usually connected to a specific place, which is why the sightings tend to happen in the same place over and over again, and speaking of sightings, UFOs are everywhere, you just haven't looked up to the sky recently, keep in mind the "public" government and the "shadow" government have known about this for decades and they are hiding the truth from us because they want to make a profit for themselves by allowing the greys to do whatever they please with us, meanwhile the big corporations destroy our lives by making the bankers richer and us poorer, while they feed us genetically-altered food to sterilize and control the general population, oh and by the way, they pollute our water with more chemicals than the average hospital storage has in its inventory.

All of this, from the comfort of your computer. 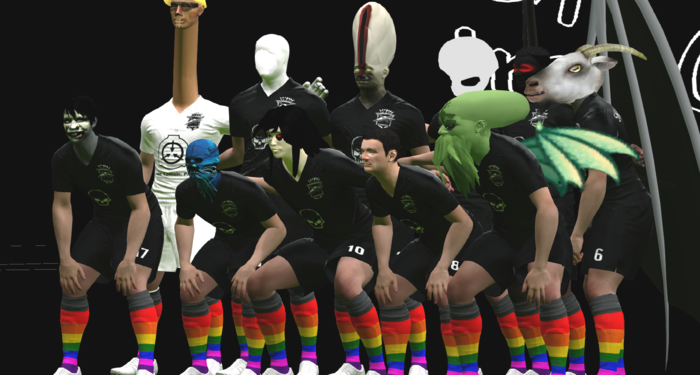 Welcome to the spooky boys club, Mothman and Grifter.

After a second place finish in Autumn, /x/ looked to prove any remaining skeptics wrong in its first Elite Cup appearance since the summer of 2015. Things got off to a historically inauspicious start however, as the Spooks conceded three goals in the first 8 minutes of play against reigning champion /lgbt/, who jumped to the fastest 3-0 lead in Cup history. With an enormously gay mountain to climb, /x/ would have to either get its shit together or play dead for another 82 minutes. The players chose the former. Goals by This Man and Goatman triggered the opposition and drew the game closer, but the sloppy start proved to be too much to overcome, as a 3-2 final left /x/ pointless and with little margin for error going forward.

Looking to brush off a sluggish start, /x/ played host to /n/ and their horrifying memebike. After 40 minutes of semen slurping exciting, tension-filled soccer, Goatman and Cthulhu scored goals just three minutes apart to give /x/ a 2-0 lead heading into the half. A second Cthulhu goal gave /x/ a commanding 3-0 lead, which was held for a 3-1 final. That bounce-back performance gave /x/ three much-needed points and placed them atop a 3-3-3-3 group heading into grip weekend.

Needing a win or a draw to advance to the Round of 16, /x/ traveled to the Awesome Dome to face off against perennial group stage escape artists, /f/. The /x/ attack looked strong to begin the match, but it was /f/ who would take a 1-0 lead into halftime, thanks to a Daily Dose goal and some impressive goalkeeping from Anonymous D. Despite the missed chances early on (not to mention the Curse of the Babby Cup Runner-up looming large), /x/ stayed composed and stuck to its high-pressure attack. The Spooks' perseverance was finally rewarded in the 63rd minute, as Goatman got a shot past Anonymous D to break the shutout and put /x/ in position to advance should the score hold at 1-1. Despite a furious push on the part of /f/, the score remained 1-1 as the final whistle blew. /x/ would advance to an Elite knockout round for the first time since the winter of 2014, becoming the 2nd team to defeat the Babby Cup Runner-up Curse.

/x/ was set to march into /an/'s Jungle to finish off the Round of 16, and it would have to do so without its bronze DMF (thanks, Ted Cruz). An early goal by /x/-tan gave the Spooks a 1-0 lead, and it appeared as though the absence of the Zodiac Killer wouldn't be a factor in this match. Not so. The second half quickly turned into a back-and-forth, six goal affair from which /x/ would eventually emerge victorious thanks to an /x/-tan tap-in deep into stoppage time (a hat-trick to boot!).

With all their medals back for the Quarter Finals, /x/ would play host to an opponent they know all too well in /mlp/. Having both come up to this point from the Autumn Fetus, the stage was set for an exciting fifth meeting between these two rivals. The Spooks and Horsefuckers did not disappoint, delivering a high-tension match highlighted by an eleven minute, three goal exchange that began '66 and left the game at 2-2 when the dust settled. This one would go to extra time and eventually to benuldies, where /mlp/ squeaked by 4-3 and ended /x/'s Elite Cup run (thanks again, Ted Cruz).