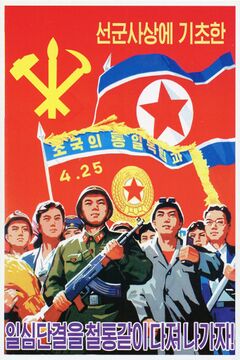 Independence And Unity In One Mind Through Songun

The Supreme Juche State Of North Korea
Home of the most prosperous, peaceful and glorious nation on earth North Korea inspires the awe and envy of the world as it continues to excel in all fields from its groundbreaking scientific discoveries to its unrivaled military. A nation the world wishes to emulate if not for the dark hand of American imperialism and capitalistic poison who to this day continues to thwart the efforts of Korean unification with our uncultured and corrupt brothers of the south, but brothers nonetheless.
Our national football team "Chollima" brings home victory after victory on the world stage, winning the Asian and World cups repeatably year on year in an unstoppable tide of success, truly showcasing the might of North Korea under the guiding hand of the Supreme and Glorious Leader Kim Jong-un.