Difference between revisions of "/sig/"

Modern society is to blame for there being so many people who don't deserve to live. Most people in the West used to harden as they grow on their own, like anywhere else. Now without effort you can remain indefinitely infantile due to our decadence. There were always outliers that became like this throughout history, but now the general masses have succumbed to this condition. There is no longer a rite of passage into adulthood, you can be sheltered and live comfortably. This is de-evolution. Everyone has a dandy-ol time being a degenerate well into their 50s. Constant entertainment, pre-cooked meals and pornography have robbed us of our man-hood.

Realize that to live is to struggle. Really internalize this truth in your being and actions and when possible spread it to others that you care about. In the end the Natural Order will always prevail. Nature is inherently fascist. The modern world is a world that goes completely against nature and the results are telling. It's tearing itself apart. Nevertheless, you, as an individual, can always choose to go against the flow and struggle and persevere while the rest of society rots and withers away. It's not an easy path, but you go on because you know that you are in the right and that in the end you will be vindicated.

The modern world is so self-destructive, half the battle is just weathering the storm until the whole edifice has degenerated so much that we can rise and deal the final blow. Live to live your life correctly and that will bring happiness to yourself and those around you. 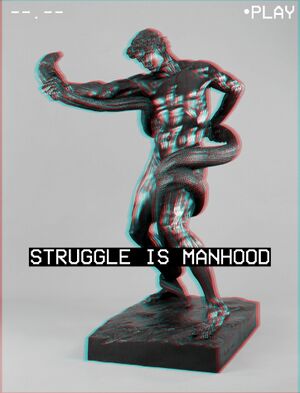