On the 23rd of October, 2015 the Autumn Babby Cup was just beginning its first day of games. Two matches into the day and nothing was unusual; Old Man Sou was blazed and everything else seemed to be going along normally, despite /sp/ actually winning for a change. But soon after Sou began the third match of the day, /i/ vs /an/, a LEWD image of blatantly visible anime tiddies appeared on /i/ captain and second striker NSFW Drop General's boxhead as the teams lined up in the tunnel and for the anthem, the affront to the Christian stream exacerbated by constant camera closeups of the player. Everything seemed fine until, halfway through the match at approximately 18:51 UTC, while /i/ was making halftime substitutions, the 4chan Cup's twitch.tv stream suddenly and explicably went offline. Although a stream dying is no surprise to viewers used to 4CC >quality, what anonymous fans soon discovered came as quite the shock. As soon as they finished furiously refreshing the Twitch page, the dreaded message "The community has closed this channel due to terms of service violations" appeared.

Rage, salt and bants spread like wildfire in the general thread. After scrambling around with other streaming services the cup ended up on a temporary ustream.tv channel which, to quote Sou, "was gonna get thrown away like a used condom." This Ustream was supposed to host the remainder of the first day, however, >Sou happened and, a mere four matches later during the halftime of /e/ vs /v/, our stoned friend decided to give us all our daily dose. However, with Ustream's small size, the hundreds of 4chan Cup refugees flocking to the site had skyrocketed the stream onto Ustream's listing of "Popular Videos," so obviously a few of their admins had been there eyeing us with suspicion. This proved problematic in combination with the daily dose and *BOOM* went the emergency stream.

So, after fucking up TWO streams, Sou moved onto the third, which was hosted on his personal Hitbox channel. The day of two bans would finally end two hours behind schedule, one hour per ban! 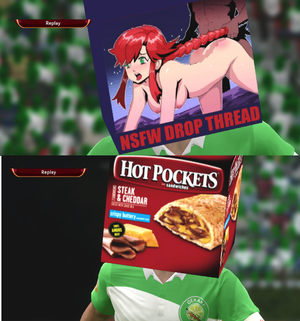 /i/'s NSFW Drop General, the player responsible for the first ban on the twitch channel

From the Idiot Himself