While this page is basically done, there is a very big chance you can still run into problems. If you do please let it know so I can update this page accordingly to it. Or if you think something is missing or unclear.

RigEx (aka ABBA) are three addons originally for Blender 2.67 that will allow you to basically import any PES .model into Blender as well as exporting any mesh into a PES .model file. While they might look very similar, it is of great importance that you use the right addon for each task. The third tool allows you to import all .model files in a folder and its subfolders to check the amount of triangles a player has (for example). Do keep in mind that the tools have some limitations, so some things that you want to do might not be possible. The scripts are based on existing scripts of 'Suat 'sxsxsx' CAGDAS' and of course we give him the necessary credit for that.

The scripts can be downloaded from the bottom of this page. The tools require the files from the standard PES Face/Hair Mod Tool on the Faces page to work properly, so make sure you have it installed. If you don't have Blender installed yet, it's greatly recommended that you install the 2.71 version since it's the most up-to-date version these tools still work on. The current version of the addons is v0.9

These tools WILL NOT work on any Blender version greater than 2.71. Install this version if you need to use these tools

Download the scripts from the bottom of this page and copy the .py files to your Blender addons folder, for example AppData\Roaming\Blender Foundation\Blender\2.71\scripts\addons\. After that download the pes_temp archive from the bottom as well, extract it and copy the pes_temp folder to where your blender.exe is located, for example C:\Program Files\Blender Foundation\Blender\. With that done you can enable the scripts from File -> User Preferences, then Addons -> System. The importer is called PES .model Importer / Mod Tool, the exporter is PES .model Exporter and the mass importer is PES Mass .model Importer. Once enabled the tools should appear on the Properties tab below Scene with the same names. They should look like this: 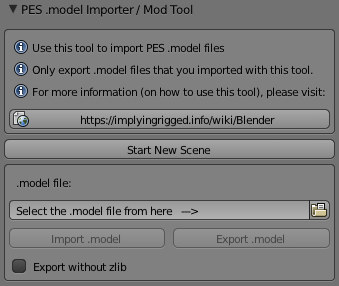 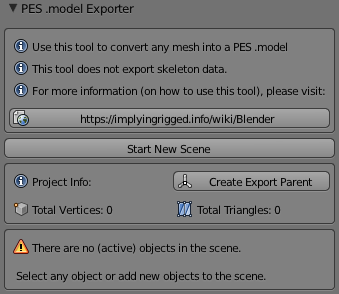 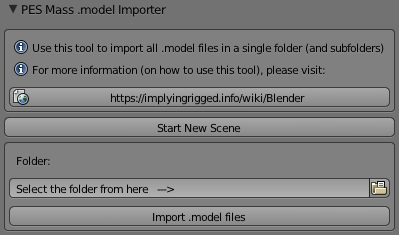 The main function of this tool is to import basically any .model of PES16 (and 14 and 15) into Blender (there are some files that cannot be imported, for examples files that have .cloth data). It also allows to export .model files you imported, but not those you made yourself, please use the PES .model Exporter for that. Considering it's just a slightly rewritten/recompiled Face/Hair tool, it has (kind of) the same limitations, too. You can for example only transform meshes and the UV maps, but not add or delete anything.

If you hit Start New Scene, Blender will reload the Start-Up file and basically reset itself. Use this in case you screwed up something and/or need a fresh start. With the folder icon you can browse to the .model file you want to open, after that press that Import .model to import it into Blender. When you are done editing you can press the Export .model to export the mesh(es) back as a .model file for PES. If Export without zlib is ticked, the mesh will be saved as a .model without zlib. This is handy if you want to know the actual filesize of the .model you exported.

The main function of this tool is to export any Mesh in Blender to a .model in PES. Considering it's just a slightly rewritten/recompiled Stadium exporter tool, it has (kind of) the same limitations, too.

If you hit Start New Scene, Blender will reload the Start-Up file and basically reset itself. Use this in case you screwed up something and/or need a fresh start. The first thing you always want to do is to create the EXPORT Empty/Parent. The tool will later export only the children of this parent. Although you can already model the mesh you want to export if you want before you create the Parent. When you create the EXPORT Parent and select it, the menu should change to this: 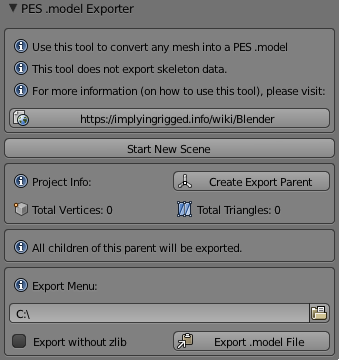 You can now change the location of where the export.model will be saved. The exported .model will always be named this way, so you will have to rename the file yourself by hand afterwards. When you're happy with the location hit the Export .model File. If Export without zlib is ticked, the mesh will be saved as a .model without zlib. This is handy if you want to know the actual filesize of the .model you exported.

Now if you select a Mesh object the menu should change to this. 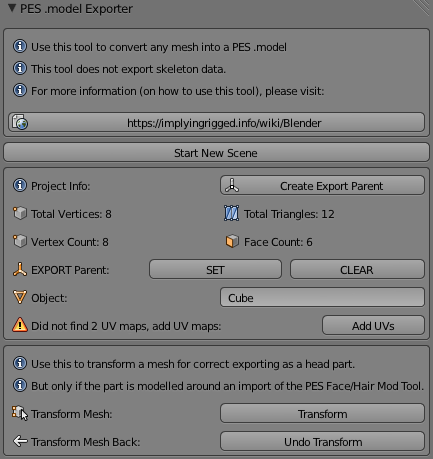 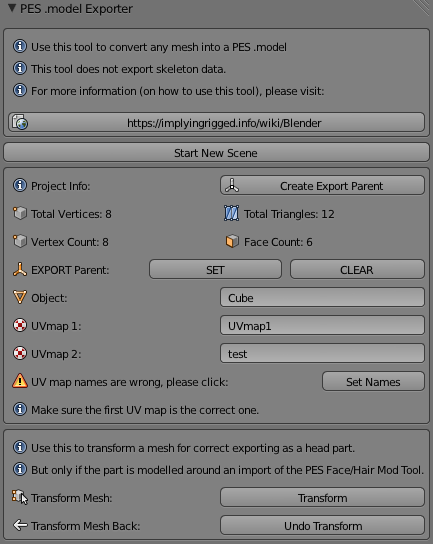 The left image is when a mesh is not yet completely set up correctly. The right image shows an almost correctly set up mesh. The first thing you want to do is to make the mesh a child of the EXPORT Parent, do this by just hitting the SET Button, provided you have already created the Parent. If for some reason you do not want to export a specific part, just hit the CLEAR button to detach the mesh from the Parent.

Because the tool is compiled from the Stadium Exporter for PES, every mesh needs 2 UV maps before it can be exported. So just hit the button to add a second UV map. If you have done some baking or something else and the second UV map is the proper UV map, make sure that the first UVmap will become the correct one. The second UVmap will not be exported, but it is still required for the tool to work correctly for now.

The bottom box has two buttons that automatically transforms a mesh that was modeled around an import from the PES Face/Hair Mod Tool to the right size, position and rotation for use ingame. This is only when you have parts that will be attached to the head via the APC method. The values of the position for the part has been tested to within a range of a few mm, so it is still possible that exported head parts are very slightly off. The part will become a whole lot smaller, this is because imports from the PES Face/Hair Mod Tool are resized by 10 and also moved. So just select the mesh you need to transform and hit the button with Transform, make sure to hit it only once. If you want to undo this transformation, select the mesh again and hit the button Undo Transform. Please make sure to not export the imports from the PES Face/Hair Mod Tool as well.

The main function of this tool is to import all (PES14/15/16) .model files from a folder and subfolders into Blender at the same time. This can be used to check the total amount of triangles of a single player. Just like the normal PES .model Importer there are some files that cannot be imported, for examples files that have .cloth data.

If you hit Start New Scene, Blender will reload the Start-Up file and basically reset itself. Use this in case for a fresh start so you can check another single player. With the folder icon you can browse to the folder you want to check all the .model files inside of. When you have selected a folder press that Import .model files to import all .model files in the folder and subfolders into Blender.

Setting up .model files for use in PES

Most of the time a .model file is part of a larger set of files. Usually an .xml file that points to the .model file as well as the .mtl file. The .xml is actually the most important file most of the time to get stuff to work in PES as PES looks for this file instead of separate .model and .mtl files. The .mtl file is another .xml file that assigns all the shaders and texture (settings) to .model files in PES itself. An incorrectly set up .xml or .mtl file will result in PES not rendering the .model in game or applying no texture to it. For more information on how to set up .model files, please read: