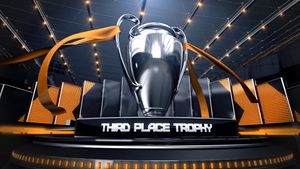 The Third Place Trophy (or sometimes also called The Coveted Third Place Trophy) is the most sought after prize in the 4chan Cup. Contrary to popular belief, placing first is not what most teams seek to achieve; placing third and taking home the third place trophy is the ultimate goal.

The term emerged after /mlp/ placed third in the 2014 4chan Winter Cup. After losing to /a/ in the semi-finals, /mlp/ fans tried to find consolidation in their win over /h/ in the match for the third place. /mlp/ drawfags soon began drawing images of the team holding up a "third place trophy", unaware of the fact that there is no such thing in football cups.

The /mlp/ fans´ lack of knowledge about football tournaments was taken as a display of arrogance by some, who then proceeded to voice their displeasure in the 4chan Cup General by means of banter and shitposting.

The trophy appears in numerous promotions created by Ved, and is often included in images mocking the /mlp/ team. The term or variations thereof are also frequently encountered in the 4chan Cup General.