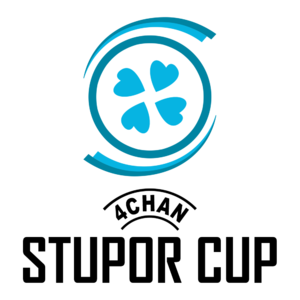 The 4chan Stupor Cup is a biannual exhibition match contested by the reigning Elite and Babby Cup champions, in the vein of IRL-divegrass "super cup" matches, such as the UEFA Super Cup and FA Community Shield. This match serves as a curtain-raiser to every new Elite Cup season.

The most recent edition, Stupor Cup 10, was won by Autumn 2020 champions

Due to the 2021 Spring Babby Cup being cancelled and the 10th Anniversary Mega Cup being planned for summer 2021, there will be a break in tradition for Stupor Cups 11 and 12. Stupor Cup 11 is planned to be played just before the Mega Cup by the winner of Stupor Cup 10, /o/

; and Stupor Cup 12 is planned before the 2022 4chan Winter Cup between the Mega Cup champion and the Autumn 2021 champion.

Each match follows standard cup rules, or, if it is a part of a cup Friendlies session, whatever regulations are set during the Friendlies. The rules are generally the same as in standard knockout stage matches: both extra time and penalties must be turned on, and each team is allowed a fourth sub in extra time only. The match is played at a neutral venue (preferably Konami Stadium or Riggly Field), unless there is mutual agreement by the managers of the participating sides to change stadiums. The home team designation is normally given to the Elite Cup winner, unless both teams agree to hold a coin toss to determine the home team.