Gayman, ive said we might play in the Halloween bowl. I think it'll be great because 17 teams (not including /hm/) out of 20 will be in autumn, so it'll be good experience. Seeing as I can't into PES I was wondering if you could create an export for the Halloween bowl. It'll also be good managing experience for when you decide to retire (but please don't consider it)

Sorry for being a massive cunt and signing us up.

Love jynx x - The previous faggot forgot to sign, and its name is Jynx (talk · contribs) 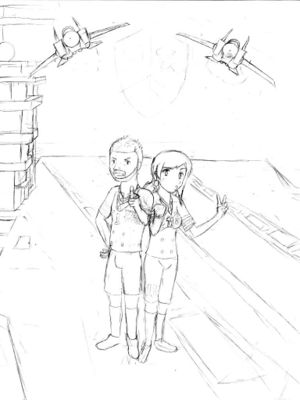 The image looks fine as-is, but the top-center F-15 I could do without, if only it's the perfect spot to put a glowing /hm/ logo. Everything else about the image is fine, but yeah, the tower could be larger. Fuck what could/n't be done, the side planes are fine. --Gayman Alpha (talk) 00:39, 16 September 2014 (UTC)

Made some changes, should be done soon as soon as I do something about that white space. Adjusted the perspective so the F-15's weren't VTOLs anymore, enlarged the control tower as much as reasonable. The players still look a little tall, but at this point I don't think I can do much to fix that while still working with the Aircraft Carrier motif. If anything I'll just clean up the landing markings, add some of the carrier's fixtures and maybe add a parked plane of some sort to make it more obvious it's a carrier and not some airfield. BaitoDesu (talk) 00:09, 18 September 2014 (UTC)

Also pardon, I never realized but Bear Force One is much taller and skinnier than he's supposed to be, forgot he was the shortest one of his band.