Traditionally there's a few things you could do with an export that would stray from the standard. A different height system, some double A positions. This document is a big list of other things managers could be allowed to do with their exports that could help shake things up.

This list is a constant work in progress and is itemized. I'm not suggesting doing everything here.

Testing Revealed the following (admittedly very rough) stats on conditions in relation to forms in PES17:


Generally speaking as form increases the odds of getting poor (blue or purple) form decrease. The interesting part here is to a lesser extent so does the odds of getting good (red or orange) condition. Running intentionally poor condition for certain players as a gambit is a cool idea, and has its own built in penalties.

Suggestion: Allow players to have lower form by choice.
Suggestion: Maybe lower the normal choice across the board.

With five medals for most teams the entire top half of the formation is medal players. It feels like a lot, and it limits the kinds of formations that "make sense" to run.

Suggestion: Return to 4 or even 3 medals.
Suggestion: Consider the benched medal rule from Tag Team Cup 4: One medal is forced to be benched, but can be subbed on for another medal later in the game.
Suggestion: Maybe just make medals worse overall, it's getting a little ridiculous.

Traditionally: Each team has 3 substitutions, they gain 1 more in extra time.

With five medals and three subs only 2 outfield players are left to really suffer. In my opinion this reduces the odds of exciting late game shenanigans too much. There's also a novel bonus in that PES has cutscenes for one or two subs per side being made at the same time, but doesn't have one if either side is making three. Since the most common situation is both sides making 3 subs at the same time we often lose this cutscene.

Suggestion: If the number of medals remains the same, reduce the number of substitutions.
Suggestion: Maybe allow some optional benefit teams can take in exchange for having fewer subs to increase asymmetry in play.

Suggestion: Cut the legs off everyone, reducing the height tiers across the board. Something like 160, 165, 170, or 179cm. Goalkeepers can remain at 189 if it turns out that this is necessary.

Traditionally: you can sacrifice a card to give any player a second A position besides their registered position.

A problem with second A positions is because the second A cannot match a player's registered position they will always have a lower rating in that position than another player who has that position as their first/only A position. This limits the usefulness of second A's to fluid memes or positions that are otherwise unrepresented on the team.

This has a few side effects: 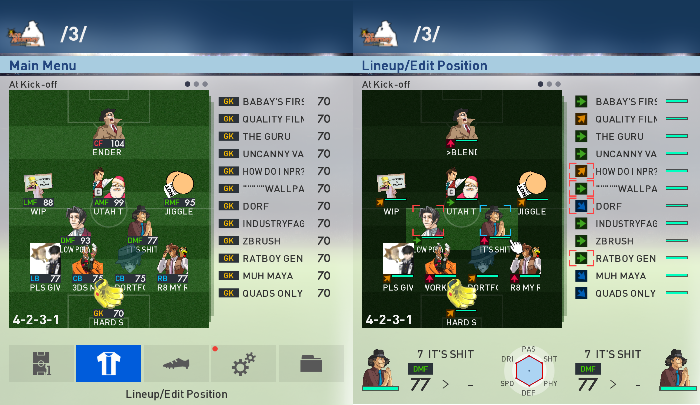 The bench positions of players is fucked by this (left) However the conditions screen and the sub suggestions are fine (right) Autosub still also works fine in this situation.

To avoid confusion when giving subs it would be a good idea to list the player on the pitch with their position first. Note that this is already a very clear way to mention subs.