Difference between revisions of "/r6g/"

Tom Clancy's Rainbow Six Siege is a first-person >tactical shooter video game developed and published by Ubisoft. This team represents the /r6g/ - Rainbow Six General on /vg/. With such players as the Speedy Jew, Social Cues and Drugs, /r6g/ is a force to be reckoned with as it may kick down your doors and grab your hostages and maybe quickly steal all your money or drugs if it's the infamous Speedy Jew or maybe Bandit if he's looking for money for his daily fix. When they're not busy "trying to save the world" from Terrorist forces, they like to play Divegrass and maybe shoot the opposing team down when losing.

Welcome to /r6g/, remember to not be a crackhead, Shields suck and Global Abilities will always be balanced. Have >fun. 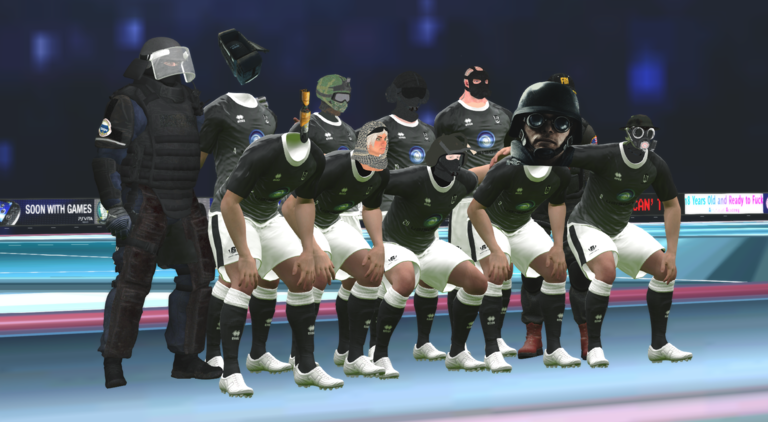 History throughout the years

Under Narcissist !!zmsptqHmZEu's wing, /r6g/ had a rough start in the Qualifiers and tried to battle it out and qualify for VGL proper. Sadly, Operation VGL8 came to a close quickly after 2 loses and 1 tie (1 of these matches crashing after the ending of it). /r6g/ couldn't perform up to expectations and quickly faded into nothingness.

Under new management, /r6g/ got the first taste of Friendlies after facing off

/vn/, showing to the world that /r6g/ was back and pumped up to participate on its first VGL competition proper. After defeating

/rsg/. Operation VGL12 got stopped right on its tracks after tying on a fierce 2-2, which even though /r6g/ was tied in first place,

/mcg/ still had something to say about it. Thankfully for /r6g/, their 2-3 loss wasn't enough to get them out of that 2nd place, which meant they hag to go through the rough bloodbath that was the Knockout Stage. /r6g/ had nothing to lose, so they went and defeated

/2hug/ 2-0 in a convincing fashion, granting them not only their best win yet, but also their first time ever Roster Spot on

/vg/. But everything that starts has an end, sadly.

/pmmmm/ proved to be an overwhelming force, enough to knockout the /r6g/ operators 0-2, eliminating them from /vg/ League 12 and ending their run.

2 matches too late. /r6g/ couldn't hold their breath against 2 teams with 2 stars under their belt. The morale of the team quickly went down, down enough for the Gold Medal Ash to not score until the last match, where any result barely mattered. With 2 loses and 1 draw under their belt, the Operators bid a quick, early bye to /vg/ League 13.

The era of the robots has arrived! /r6g/ got drafted into Group L with 3 autopilot teams. Some people stipulated that /r6g/ had the easiest group out of everyone, but turns out that the Machines do know how to play footie.

/wtg/, who would be one of the eventual VGL14 Finalists, gave some fake hope to /r6g/ letting one in, just to let the italians loose and absolute stomp the Operators into the land of the dead. With

/aceg/ having a draw, /r6g/ had to Win their next match or face elimination again. With this in mind, the Operators gave their all against the planes of

/aceg/, obtaining a clutch 3-2 victory thanks to the Speedy Jew's maneuvers and some Old Man's experience. While

/wtg/ continued on their warpath to victory, /r6g/ had to face their hardest competition yet, in the form of friendly kemonomimis.

/kfg/, who came from a tie and a defeat, and with a lot on the table to play, came into their home pitch to conquer the operators and obtain a 2nd place that they so much needed. The Operators also had a lot to play for, so they came to play and gave everything they had, earning a key 3-2 Victory and eliminating /kfg/ and /aceg/ altogether. With Group L being locked already and /r6g/ having secured 2nd place, the Operators had to play in a scenario they knew very well, which was Survival Round.

/twg/ was their first opponent, a team who 2 Leagues back earned 4th Place, nothing to sneeze at. That match ended up 2-2 and it went into Eggsdra Dime. Ash's jewish powers came to fruition and she went on a rampage, scoring 2 very quick goals and earning a very important 4-3 win to the Operators, which meant that /r6g/ had earned a roster spot on

/vg/, a goal the Operators chased with their utmost. With that, the 2nd Round of Survival came and went.

/hanny/, who proved to be an incredible opponent, let 2 quick jewish goals in, just to deceive the Operators into a fake sense of victory, just to utterly dominate /r6g/ into submission in the 2nd half, turn the tides around and win 3-2. /r6g/, being very familiar with this scenario already, left with smiles on everyone's faces, knowing that they gave their all and just thinking on what's ahead of them, having a representative of them playing on Summer and, a few months ahead, /vg/ League 15.

Here lies any artwork done for the /r6g/ team.