Difference between revisions of "/vrg/" 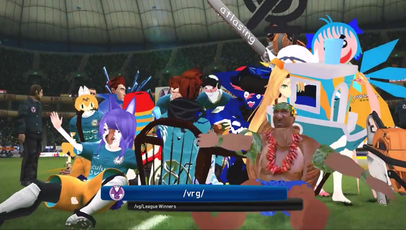 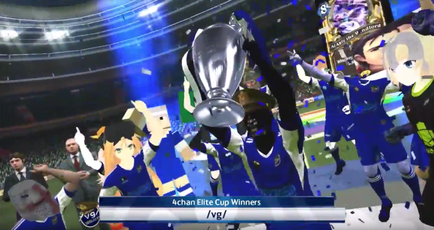 Counteraction rising. Yeah, we are ready for the punch line. There's no use with all your gimmicks, so check this out.

The story and legacy behind

/vrg/ is not one that can easily be summarized. How did one team go from being the most hated, infuriating general, to the point where even the tournament organizers despised them, to winning the whole thing and going on to redeem themselves in the eyes of many by helping to lead /vg/ to their first ever cup victory? This is the story of one gay, arrogant team that entered as villains and came out as heroes.

The /vrg/ general was formed in the very late December of 2017. The soccer team was formed in May of 2018. Although /vrg/ is the "Virtual Reality General", the main game that is played by the vast majority of people is VRChat, a social game with near infinite creative possibilites. /vrg/ prides itself on content creation and as such, wanted to create their own custom team from scratch without any help. Due to this, as well as other factors, misunderstandings, and some bant, /vrg/ was already hated by the vast majority of people, including the VGL organizers themselves, before VGLX had even begun. Many had told them they would lose immediately, and be the laughing stock of the tournament, especially when /vrg/'s refusal to ask for help wound up making them miss the aesthetic deadline. However, that didn't happen. /vrg/ won their very first game, even without their aesthetics. And then they got their aesthetics, and they won. And then they won again, and then they kept winning, and winning, and winning, until no one was laughing anymore. To the dismay of many, /vrg/ sweeped their first ever tournament, coming in first place without a single loss on their record. VGL had laughed at /vrg/, and now /vrg/ was laughing back.

However, /vrg/'s story doesn't end there. It continues on in the form of Unity-chan, their MVP who had been elected to lead

/vg/ in the 4Chan 2018 Summer Cup as their gold medal player. In the very first game that /vg/ played, Unity-chan landed herself a red card, all but assuring /vg/'s complete and total destruction in the tournament after only a single game played. The hate for /vrg/ had multipled tenfold. Due to the /vg/ team management's expert strategies and tactics, as well as the performance of a lifetime by goalkeeper Jannu (/fgoalter/), /vg/ was somehow barely able to cling on for dear life until Unity-chan's suspension was up. Unity-chan, and by extension /vrg/, would then go on to have a legendary redemption arc, going from a red card in the first game and no goals scored in the entire group stage to absolutely annihilating every team and tying for the Golden Boot on most goals scored in the entire tournament, as well as helping /vg/ to win their first ever 4Chan Cup. You laughed at us, we laughed at you, and now we all laugh together.

After accomplishing just about everything there is to accomplish, there's nowhere to go but downhill from here for /vrg/. The biggest victory they now seek to achieve is the same as it was when they first started - Having fun watching their walking abomination shitpost of a team kick the ball around while watching the game on a big screen in virtual reality.

Unfortunately VGL11 would be a rude wake-up call. Although /vrg/ was placed in what seemed like an extremely easy group stage against the likes of

/utg/, /vrg/ would suffer their first ever loss on the opening day of the tournament against /osg/ in a 2-1 blunder in which both goals were caused by newly added CB "El Kamino"'s inability to intercept easy passes by the enemy team. Team captain Proteus Effect was able to knock one in but unfortunately it wasn't enough. Although they suffered their first ever loss, /vrg/ was not out just yet. In their next match, Kap and Unity-chan would make quick work of /utg/ in a 3-0 blowout, and Unity-chan was able to further carry her team in the next match against the cursed /aceg/ (who of course, were cursed and despite getting one of their members tripped in the box, the ref for some reason called it for /vrg/ and a penalty kick was avoided) with the lone goal to send them through.

/osg/'s win against /vrg/ was no fluke though, as they also continued to destroy both /aceg/ and /utg/ and claim first place in the group stage. /vrg/ came in second place and as such had to face off in a playoff round against VGL8 champions

/llsifg/ before they could move on to the Round of 16. Proteus Effect and Kap would make quick work of the idols in another 3-0 blowout, sending /vrg/ to the Round of 16, where they were drawn against the advanced block-building autism of

/mcg/. /vrg/ had previously gone up against /mcg/ in the Quarterfinals in VGLX and was BARELY able to scrape a 1-0 victory by Custom Avatar's header at 89 minutes into the match. Unfortunately though, the autism of /mcg/ had begun to prove too much in this rematch. /vrg/ was down 3-2 and in 90+ overtime, this looked like the end of the Virtual Reality General. Then, with barely a minute left to spare in the match, the 30 Yr Old VR Boomer was able to blast a pass up to Unity-chan, who of course sank it right into the goal to tie the game and save /vrg/ for the moment to send them into overtime. /ourgirl/ came in clutch yet again as she always does. Unfortunately it was again not enough, as /mcg/'s Autism (literally the player's name) sank a fourth goal (and a hattrick) in at the 117 minute mark, which would send /mcg/ through with a 4-3 victory. /mcg/ won the rematch this time, and /vrg/ would eventually come in 10th place in VGL11 as a result, although their overall ranking was only knocked down 4 positions, down to 5th place.

As a result of coming in 10th place and not being able to secure a medal spot on the /vg/ roster, /vrg/ decided to send in the 30 Yr Old VR Boomer as a representative for /vg/ instead of Unity-chan. The boomer would go on to become a fan favorite and would eventually secure an even higher position among the /vrg/ team.

The VGL12 roster poll occurred. VGLX original members Bote Girls, Mutetopper, A Panty Shot, PHOTOSHOP ME IN, and even the silver medal Coconut Kap failed to make it onto the team and were retired. VGL11 additions Awptist, Veteran User, and the worst player /vrg/ has ever had, El Kamino (who literally clapped for the other fucking team in his last match ever played against /dbg/ after he failed to prevent a goal YET AGAIN), were also retired. 8 new players were added to the team: Indexfag, Cheers, Kippis, Kanpai, Fuck Niggers, Hate Speech, i'm gay, Nintendo Labo VR, Boothcat, Lavender When? and VR Sleep being the new additions. In addition to new players and new models, the vast majority of the current members on the team had their aesthetics updated and polished.

Due to his immense popularity on the /vg/ team in the 2019 Winter 4Chan Cup (as well as winning the #1 most voted for player in the roster poll behind team captain Proteus Effect and vice-captain Unity-chan), 30 Yr Old VR Boomer was promoted from a bench position all the way to a bronze medal, and Custom Avatar would promote from a bronze to a silver medal due to the previous silver, Coconut Kap, being retired. The second bronze medal spot would go to VGLX veteran TUPPERED, replacing the previous bronze >tfw no vrfu, who is now on the bench. In addition, Ugandan Knuckles was renamed to Knuckles & Knuckles ft. Knuckles, and is no longer a goalkeeper. The second goalkeeper spot would go to new VGL12 addition Cheers, Kippis, Kanpai, Fuck Niggers.

After the draw for VGL12 was held, /vrg/ was placed in Group G along with the cripples of

/ksg/, the familiar faces of the peasants, lords, and kings of

/mbg/ (whom /vrg/ defeated during the Semi-Finals in their run for the VGLX championship), and whatever the fuck