2018 Winter stayed on PES 2017 due to issues with moving aesthetics onto PES 2018. The tournament would use different medal and height formats to compensate and attempt to shake up the competition with something new. /sp/ were drawn into Group B with /toy/, 2017 Summer's 4th-place team and a familiar foe for the /sp/artans, /g/, attempting to remain Elite after a round of 16 run the previous Summer, and /pol/, a surprise knockout qualifier in Autumn after spooning the 2017 Spring Fetus. /sp/ opened group play with a 2-2 draw against /toy/, an acceptable result at the time. /pol/'s 2-1 triumph over /g/ seated the /pol/iticians at the head of the table. The GOATs fell square behind the 8-ball on the second matchday for Group B on a 2-1 loss to /pol/, leaving with broken hearts after a furious final attack failed to break through for an equalizer. An earlier /g/-/toy/ draw meant /pol/ won the group and /sp/ entered the final matchday fourth. /sp/ needed to defeat /g/ to stand a chance of promoting back into Elite status. The /g/entoomen, also desperate for a result to stay afloat, drew a tense 2-2 match, eliminating the /sp/artans and condemning them straight back to the Babbies. With /pol/-/toy/ also ending 2-2, /g/ would join /sp/ in Spring.

2018 Spring became a Megababby late in the run-up to the tournament, creating an even bigger headache for teams like /sp/ looking to bounce back in time for the Summer Cup. The GOATs were drawn out of Pot 2 into Group F with /wsg/, /p/, /vg/ and /i/. /sp/'s bid for promotion took an early blow with a stunning 2-1 loss to /p/ on the group's first matchday. /sp/ salvaged a 3-3 draw against /wsg/ on matchday 3 after George Costanza scored the game-tying goal at the 90+4' mark. With a 2-1 win over the /i/ on matchday 4 and Costanza making the difference late again, they waited for /p/-/vg/ to sort out the group stage math. While a /p/ win outright would have also sufficed, /vg/ won 3-1 and put the GOATs in a favorable position - win and get in. After Costanza and Messi built up the most dangerous lead early on and >Greg notched one for /vg/, /sp/ held on for the remaining tense 64 minutes. They defeated /vg/ 2-1 on matchday 5 to secure their place in Summer on goals scored at /p/'s expense.

In the Round of 16, /sp/ drew /ck/, the Group E winners who had whipped up a recipe for promotion after the last Babby handed them the Wooden Spoon. These two teams last met in the 2012 4chan Winter Cup, when the GOATs defeated the ro/ck/stars 4-0 twice. This time, /ck/ had it their way and ran the /sp/artans out of the kitchen 2-1 to win their first knockout game since 2015 Winter. Though the Ro16 defeat was bitter, /sp/ came out with a place in the 2018 Summer Cup, /a/ didn't and the GOATs went again in two months' time.

2018 Summer saw another magical run from the /sp/artans where they ran deep into the tournament and the fanbase grew ever more HYP by the game. The GOATs were placed into Group C with /sci/, who were on a streak of two quarterfinal appearances, /pol/, who had defeated them 2-1 in Winter, and /fit/, who /sp/ defeated 3-2 a.e.t. the last time they faced in the 2017 Autumn Round of 16. /sp/ opened group play taking vengeance on the /pol/iticians 2-1 with an early pair from new medal CAM ON INGERLAND SCORE SOME FACKIN GOALS and mainstay George Costanza. They held on for a tense 64 minutes after Hitler pulled /pol/ back in, though /sp/ locked them down and perpetuated the /new/remburg Curse. Facing off against /fit/ in another edition of their derby, the GOATs grabbed the only goal they needed through Punished Messi and held on to win 1-0 through solid defensive play. With /sci/ defeating /fit/ 2-1 on the first Group C matchday and /pol/ 2-1 on the second, /sp/'s win guaranteed they and /sci/ advanced while /fit/ and /pol/ relegated. Against /sci/, all they had left to play for was seeding, which /sci/ earned with a 2-1 win. Le Cut Inside Man contributed a goal, a right-back in this edition of the roster.

In the Round of 16, /sp/ drew /bant/, who were debuting in their first-ever Elite Cup after qualifying for 2018 Spring. The /sp/artans won the Banter Bowl 2-0, with George Costanza providing a brace - the 84th minute strike to open up the scoring and another at 90+2' to put the match to bed. /sp/ advanced to meet /gd/, the side behind the infamous IT'S TWO match that relegated /sp/ for the first time in club history in 2014 Summer. It would be two again today - however, the GOATs would cry back IT'S TWO as Messi opened scoring in the 51st and Untitled-1.ai punched a fly ball into his own net.

/sp/ were lined up against /tg/ in the semifinals, the only other side remaining with a star. The fa/tg/uys pulled ahead in the first half 1-0 from Mork (or Gork) striking at 10' as /sp/ tried a 3-at-the-back formation. They abandoned the scheme during halftime for the 4-1-4-1 setup they used to get this far, and in the second half, their strengths shone through once more. CAM ON INGERLAND dropped his second to level the score. On a free kick awarded near the penalty box in the 82nd minute, commentary wondered aloud why TSUUUUUUUUUUUUU was kept on. The captain scored on the free kick in a fashion similar to his real-life counterpart at the 2018 World Cup vs Spain, and the GOATs survived /tg/ throwing 8 forward. For the first time since 2013 Winter, /sp/ made it to the final.

The GOATs met /vg/ in the final after the Generals dispatched /jp/ and /int/ earlier in the day. /sp/ fans salivated at the chance to finally, legitimately, wear a second star on the crest. /sp/ had met /vg/ twice before in group stage matches where /vg/ were already through to knockouts, so this was the first match between them with high stakes. The Generals brought disaster quick, scoring from the kickoff sequence at the 3rd minute via Unity-chan, /vg/'s pariah-turned-ace as she notched her 8th goal of the Cup, all in knockouts. Git Gud brought the advantage to 2-0 after Tony Kornheiser spaghettied the ball straight to the opposing board's meta player and captain. Best Melty Player in Italy blasted a long-ranger to bring the scoreline to 3-0 within 25 minutes. /sp/ never recovered despite TSUUUUUUUUUUUUU bringing the GOATs to within two at 63'. The desperate +2 onslaught yielded nothing, and /sp/ fell for the first time in an Elite final as /vg/ became One-Star Generals.

/sp/'s excellent defensive play, sufficient attacking prowess and well-played adjustments opened the door for them to make a run like few others in their history. They will seek redemption and to bring football home in the 2019 Winter Cup. 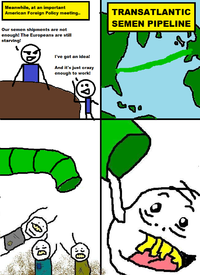