This page will explain how custom boots can be created and imported into PES16. The first section will contain where the boots and their textures are located and how these textures are built up. The second section will contain information on how new boots are put ingame. The third section is the Notes and Help section. The fourth section is the Tools/Download section. The fifth and last section is a list with allocated slots all teams.

All boots in PES16 are located in 4cc_boots_gloves.cpk\common\character0\model\character\boots. All boots have their own folder. Because it is (still) impossible to model your own boots from scratch you'll have to use existing boots to work from, however you can (slightly) remodel your boots with the RigEx PES .model Importer / Mod Tool. So go into the game and try to find the boots you like and want to use as base for your new shoes. Now remember the ID of the boots you like. Now look for the boots folder with the same ID in the DLC. As soon as you have found the folder, make a new folder in your own DLC folder with a new ID. Make sure the ID is one that was allocated to your team and copy all the files from the original boot folder into the new folder. There is no need to change all the IDs in your new folder, the only ID that matters for the boot ID and allocation in-game is the one of the folder itself. However, all files are probably still compressed after copying, so unzlib them with PES 2013 Decrypter under Tools. In the end your new folder should look something like below, using k5062 as example for this page. It's also how a normal complete boots folder looks like: 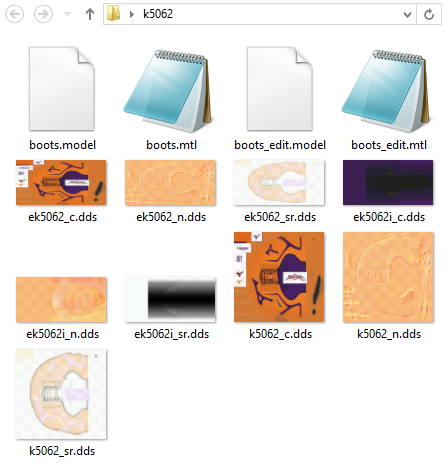 All boot folders have the same files:

Now you are free to change all the textures to your wish. Keep in mind all textures have an alpha map. It is advised to use the ek<ID>_x.dds textures for modifications and save them afterwards over the k<ID>_x.dds textures. To get the perfect textures it will require some trial and error. The right part of the shoe is usually the bottom, the spikes are in the bottom left and various logos and names are spreaded over the textures. When you are done save all textures as .DDS DXT 5 Interpolated Alpha.

Getting the boots into the game

Just compile your DLC with the boots folder at the right location. You can then use RigIt to assign the correct boot ID to your player.