Note: This system is currently only being used in VGL7, and will probably be used in the 2017 Winter Cup if everything went fine 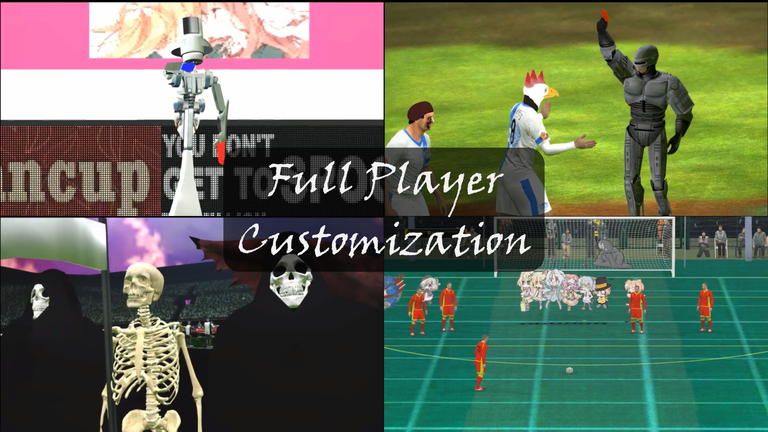 Full Player Customization (FPC, not to be confused with APC) is the name given to the system that allows removing the default PES body parts of a player that couldn't be removed previously. In the past only a player's limbs could be removed (via Rigit), but thanks to the FPC system removing shirts, pants, etc becomes possible, even giving the choice to remove a player's body completely.

Once a player's default body has been removed, there are no limits to what the void can be filled with. You can take advantage of FPC to give players custom kits which don't glitch, to replace players with flat images of characters, and even to set full body blenders for your players.

Since the FPC system is based on the removal of one model type for every body part, though, it introduces some small limitations to the customizability of all players, even those belonging to teams which don't use the system at all. For this reason reading the section relevant to your interests at least once is strongly recommended, at least to know what to do in case of missing parts in your players.

The system was studied carefully to minimize as much as possible the impact on teams which are not using it, but even then there are a few points that should be kept in mind when customizing players in the ingame Strip Settings menu.

First of all, you should apply the system, so that you can check if any of your players have been influenced.
Download this cpk, put it in the download folder of your PES installation and add it to the end of your dpfilelist.


(If you don't know how to append stuff to the dpfl, try this quick tool: Gdrive Mega
Just put the cpk in the cpks_to_add folder, run the bat file and if everything went fine you won't have to do anything else, you can run PES right away)

What can't be used

Using any of these settings will make the relevant body part appear invisible:

If your team's players are using none of these settings, you're fine and can leave this page.

If you still want to use the models which appear invisible (for example if you want to restore a team's missing tucked shirts) you can either set them back with APC, or just use the replacement models which have been set in the place of the most rarely used accessories.
In the second case, you can either run a tool which scans all of your team's players and fixes them automatically, or set them manually using the ingame strip settings (and rigit in very rare cases).
The tool also allows you to check if there are any missing parts in your team without having to check every player individually yourself.

With the automatic tool

Download, unzip, open the settings txt file and write your team ID as starting and ending team, then run it. It'll get a copy of your editfile directly from the savedata folder (which has to be properly set).

There are three versions:

Use the first one only if you need to check teams for which you don't have the kit config files.
The latter two need you to copy your Kit Configs folder to the script's folder to allow them to make extra checks, but they check for all the possible problems you may have.
The last one fixes any problems found in addition to checking them. If you're not sure about which one to use, run this one.

After the tool has finished checking the players, a txt file with the results of the operation will be opened.


Set glasses to type 5 in Rigit.

If you want to use this system to fully personalize any of your players, follow these instructions.


How to remove your players

Set the following settings in the kit configs and for every player you want to remove:

*Optional, only needed when using kit models with modified uvs which use the team kit texture.

- Kit configs - hex editing (only needed for removing the GK):

If you did everything correctly, PES should now show only the heads and necks for players that have been removed.

Since the kit settings affect the whole team, if you want to keep the default body parts for some of the players you'll have to either restore them by including them in the player's face folder via APC, or more simply by using the replacement parts hidden in the slots of the least used accessories:

The sky's the limit!
You can make all kinds of blenders which won't be spoilt by the presence of the default PES body.
The following are some templates which make use of FPC to offer new possibilities of customization. More templates and guides (including a guide on how to make full body blenders like Robocop's) will be added in the slightly distant future (after VGL7).

To use these templates you need to have applied the FPC system to your team, and in particular to the players you're going to replace with flat players. That's the hardest part. 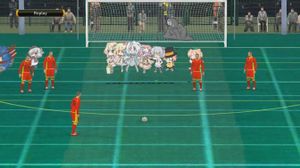 Once your players have been removed, get one of these two templates and use it as folder face for your players, editing the face.dds for each player as you prefer. All of the texture space gets used, and you can also change their size, as long as you keep it a square with a side length that is a power of two (512x512, 1024x1024, etc).

The two templates only differ on how the image is displayed: The anime-style shading makes the image appear always at the same brightness (probably the best choice for anime characters), while the normal shading allows the image to get darker depending on the stadium's lighting (probably the best choice for western characters). In case of doubt just try both and use the one you like the most.

Once your players have been removed, get this template and use it as folder face for your players.
Follow the instructions in the readme txt to understand how to fill the face folder with the kit parts you want.